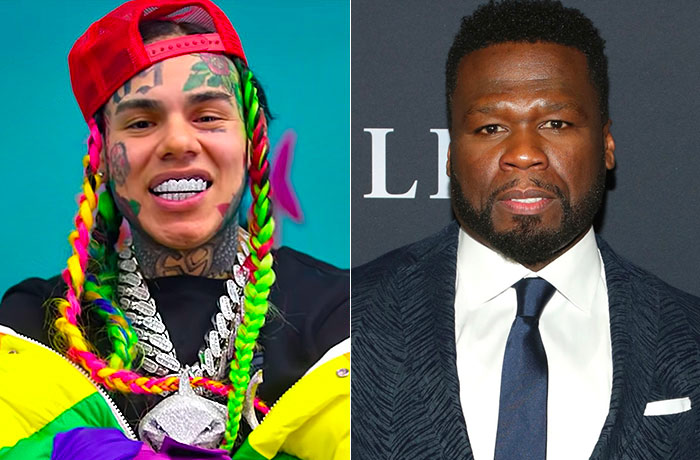 6ix9ine is eyeing a remake of 50 Cent’s classic.

While speaking with Akademiks on Instagram Live this week, Tekashi revealed that he wants to record his own version of “Many Men (Wish Death),” which originally appeared on 50’s 2003 debut Get Rich or Die Tryin’.

“I wanna make a ‘many men, wish death ‘pon me,'” said the “Trollz” rapper while singing along to the track.

After being told that Pop Smoke had already flipped the track, Tekashi praised the late Brooklyn MC. “That shit was so hard,” he said before pulling up Pop’s version on his computer. Akademiks went on to celebrate Pop as one of the “new school of artists that ran New York” and Tekashi concurred: “I am never gonna contradict that.”

Pop Smoke previously dropped a freestyle to “Many Men,” which can be heard in the trailer for his posthumous album Shoot for the Stars, Aim for the Moon. 50 also shared Pop’s version back in February.

Music is the tool of revolution. We have been watching, along with the rest of the world, as long overdue change starts to take root. We have seen Pop’s music become the soundtrack of the moment, unifying the masses. Given recent events, we have decided to delay the release of his album out of respect for the movement. “Make It Rain” will be released this Friday, June 12th. The album will be released on July 3rd. Please join us in celebrating Pop Smoke’s legacy. 💫💫💫.

While he once co-signed him as the “King of New York,” 50’s feelings for Tekashi soured after he snitched and he ruled out any future collaborations. “I wouldn’t work with him. What it is, is it’s just against the way I grew up,” he said during an interview with Big Boy on REAL 92.3.

Earlier in the week, 50 shot a video for his Pop Smoke collaboration, which also features Roddy Ricch. The song is set to appear on Pop’s debut album, which drops July 3. Earlier this month, his estate released the album’s lead single, “Make It Rain” featuring Rowdy Rebel.