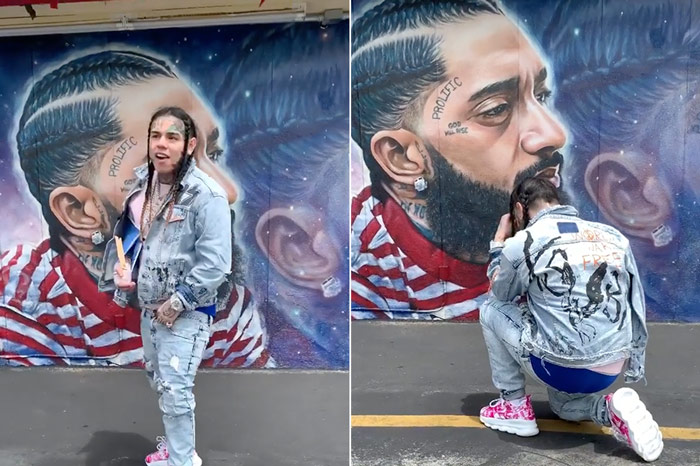 6ix9ine is paying his respects to Nipsey Hussle.

During his trip to Los Angeles this week, the “TROLLZ” rapper made a visit to Nipsey Hussle’s mural. He shared footage of himself standing in front of a portrait of the late West Coast icon and praying while waving to someone off camera as Nipsey’s song “Last Time That I Checc’d” played.

Tekashi said that he originally tried to visit Nipsey’s Marathon Clothing store, but it was closed, so he found a nearby mural at a Fatburger drive-thru on Crenshaw Blvd.

“REST IN PEACE NISPEY ! I KNOW YOU LOOKING DOWN ON ME IM OUT HERE IN THE HOOD PAYING MY RESPECT,” he captioned the video. “P.S THE STORE WAS CLOSED BUT THEY PAINTED THIS ON THE SAME BLOCK.”

REST IN PEACE NISPEY ! I KNOW YOU LOOKING DOWN ON ME IM OUT HERE IN THE HOOD PAYING MY RESPECT 🌈🌈🌈🌈🌈🌈🌈🌈🌈 P.S THE STORE WAS CLOSED BUT THEY PAINTED THIS ON THE SAME BLOCK

His appearance has stirred controversy as 6ix9ine cooperated with feds and snitched on several of his associates, something Nipsey did not condone. Nipsey’s alleged killer Eric Holder has also been accused of being a snitch.

“Total disrespect he died because he told a snitch get from round him,” commented one fan, while another added, “Bro Nipsey Turing in his grave rn.”

“You gotta demand more from the public…” @NipseyHussle thoughts on Tekashi #BigBoy pic.twitter.com/9JQMiEnuVi

Prior to his death, Nipsey addressed Tekashi on “Rich Ni**a Lifestyle” off Rick Ross’ album Port of Miami 2. “When it’s war time never lay low / Y’all play roles / Can’t name a fake ni**a that was not exposed,” he raps. “How y’all ni**as so surprised that Tekashi told? / Ain’t a real street ni**a ‘less you got a code.”

He also spoke about 6ix9ine during an interview with Big Boy on REAL 92.3. “The public should not even react to clown s**t,” said Nipsey. “The public should follow the real ni**as. The real ni**as ain’t reacting, so y’all don’t react. Put the dude on goofy time and just let him sit over here and do what he doing till that shit expire, ’cause it always gonna self-destruct, clearly.”

This Saturday would have marked Nipsey’s 35th birthday.