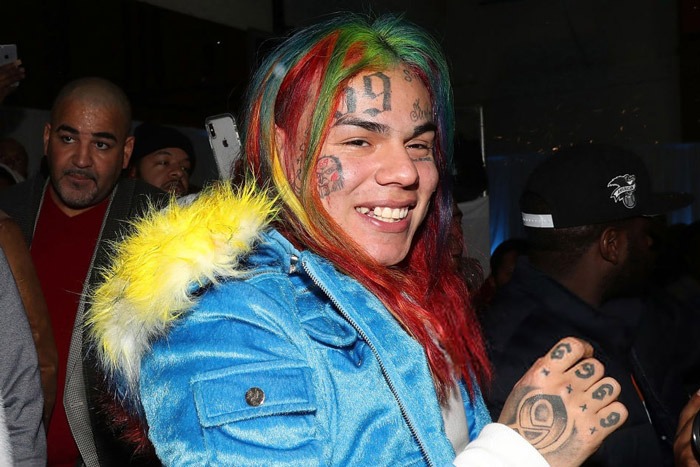 After returning to Instagram earlier this month, Tekashi made a surprise appearance during Tory Lanez’ Quarantine Radio on Instagram Live on Monday, where he made yet another reference to his snitching while teasing new music.

Out of nowhere, Tekashi appeared in the group chat. “Lemme play this new shit or ima snitch on u,” he told Tory. “You not even from America u from Canada.”

Tory saw the comment and read it out loud, joking that it was in violation of Instagram’s community guidelines (Tory was previously blocked from the social media platform for nudity). “Guidelines! Oh my God!” said Tory, who collaborated with 69 on “KIKA” off Dummy Boy.

Tekashi 6ix9ine comments on Tory Lanez IG live saying he’s going to snitch on him if he doesn’t let him play his new music👀‼️ #QuarantineRadio pic.twitter.com/1O79gGILvu

Since leaving prison on April 2, 6ix9ine has been using social media to joke about his snitching. He even changed his Instagram profile picture to an animated version of himself in an orange prison jumpsuit, reclining on a rat trap while eating a piece of cheese. “Why everybody callin me a snitch? I’m missin something…?” he wrote in his bio.

Tekashi was released from a Queens Detention Facility to home confinement, where he will serve the remaining four months of his 24-month sentence due to the risk of coronavirus. While he’s able to use social media without restrictions, his lawyers claim that he will stay out of trouble because the feds are watching.

He has reportedly set up a studio at home and is working on new music including an English and Spanish album. He plans to start recording ASAP as part of his multi-million dollar deal with 10K Projects.