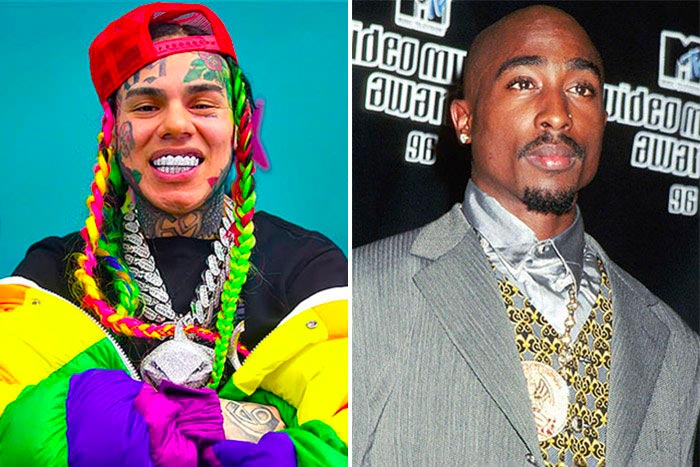 6ix9ine is making no apologies.

As he prepares to release his new album TattleTales on Friday, the controversial rapper speaks out on everything from his snitching to his bad reputation in his first interview with The New York Times since his release from prison in April. He has remained a polarizing figure and he’s not about to dial down his antics. In fact, he plans to “just keep dominating.”

“How would you feel if I go out there on the ledge and jump off that building and kill myself?” 6ix9ine asked. “That’s what society wants me to do.”

In February 2019, he pleaded guilty to firearms and racketeering charges. He received a reduced sentenced after cooperating with prosecutors and testifying against members of the Nine Trey Gangsta Bloods. But he doesn’t have any regrets about snitching.

“Before I broke the street code, how many times was it broken to me? ‘It’s all about honor, loyalty.’ Well, let’s talk about if sleeping with somebody’s girl is honor, kidnapping somebody is honor, stealing hundreds of thousands of dollars from them is honor, trying to kill them is honor. ‘Snitching’s not street!’ But street is taking advantage of one of your homies?” he said.

Prior to his fame in 2015, he pleaded guilty to use of a child in a sexual performance. “I was at the wrong place at the wrong time,” he said, noting that he is not a “40-year-old Jeffrey Epstein-type.”

The reporter argues that Tupac was more multifaceted than 6ix9ine, who only makes “fun, turn-up music.” “You’re telling me he gave back through his art? You’re lying to me,” he said. “I got to feed what, in 2020, is relevant. I got to feed the masses. There’s no difference between me and Tupac Shakur.”

When asked why he doesn’t make more introspective music, he responds, “I can go there, but my fans don’t want that. You don’t go to McDonald’s and get filet mignon.”

He admits that he worries about death (“At this point, it’s a lifestyle. I worry about it, but I’m not scared of it”), but knows not to put himself in “stupid situations.” However, he never considered the witness protection program. “F**k no. They were like, ‘Yeah, it wouldn’t work anyway because your face tattoos. You’re too noticeable,’” he said.

He also addresses his use of the N-word (“Nobody’s going to make me stop saying [expletive]. I grew up in Bushwick, Brooklyn. All my friends are Black”) and comparisons to President Trump. “I don’t think Trump trolls. I think Trump is genuinely Trump. I get compared to Trump every day. But I love Mexican people. I don’t think we’re the same,” he says before adding, “I would vote for Trump.”

And while he may not be well liked, he’s not looking to change. “It’s made me millions of dollars. I’m stupid, but I’m not dumb. What if I change, and I don’t make no more money? Keep hating me, because you’re going to keep tuning in.”