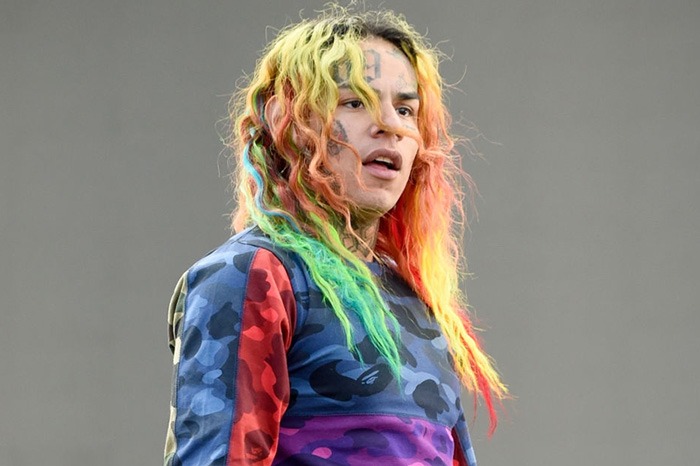 Just three days after his release from prison to home confinement, the once notorious troll has returned to social media. Tekashi popped up on a post by The Shade Room on Sunday, commenting on a story about Los Angeles Mayor Eric Garcetti offering rewards for those who snitch on businesses that violate the city’s stay-at-home order.

“Coming to the rescue,” joked Tekashi, a clear shot at himself, who snitched on members of the Nine Trey Gangsta Bloods in return for a reduced sentence.

Lol who said 6ix9ine ain’t finna still troll. This his first comment on Instagram since he got released pic.twitter.com/RkNRA7fwpr

Expect to see more of Tekashi on social media now that he’s back home, but he won’t be trolling. His lawyers tell TMZ that the rapper won’t be beefing with or trolling other artists because the feds are watching.

There are no restrictions on his social media use, despite being on supervised probation for the next five years. 69’s probation officer will be monitoring what Tekashi posts online. His lawyers assure that it won’t be anything inflammatory and that he will use discretion and common sense when he uses social media.

Tekashi was released from a Queens Detention Facility to home confinement on Thursday to serve the remaining four months of his 24-month sentence because of his asthma, which puts him at greater risk for COVID-19.

Now that he’s home, he plans to spend time with his family and get back to music. He will be setting up a studio at home to record an English and Spanish album. “He already got an advance for all those millions of dollars,” his lawyer Dawn Florio told Complex. “So he’s gotta put out those two albums as soon as possible.”