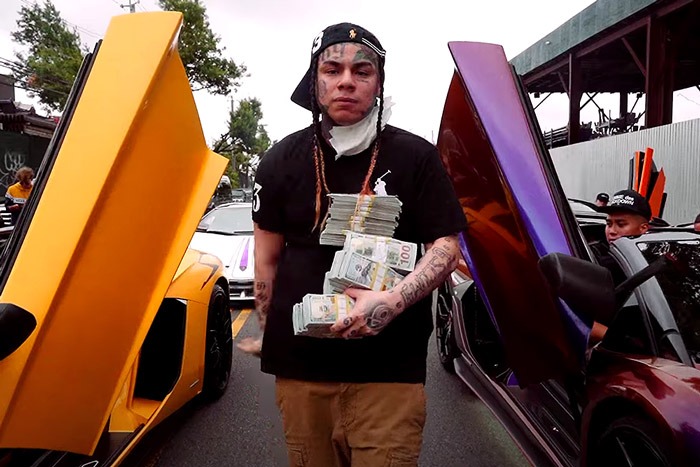 6ix9ine is back with another one.

Fresh off house arrest, the rapper celebrates with the video for his latest single “PUNANI.” Unlike his previous videos, which were all shot under home confinement, this is the first filmed outside. It was released just hours after being filmed on Sunday morning and finds the self-proclaimed “King of New York” back on the streets while joined by his girlfriend Jade and an entourage.

Tekashi—sans rainbow wig—cruises the Brooklyn Bridge while on the hood of a Lamborghini, hits up a McDonald’s, and flaunts stacks of cash with his crew and security in tow.

He also returned to Instagram following the video’s release. “IM FREE !!” he told his 24 million followers. “BROOKLYN THIS MY TOWN NEW YORK THIS MY CITYYYY YOU HEAR ME!?!?! KING OF FUCKING NEW YORK YA COULD NEVA DO WHAT I DID AND BE OUTSIDE DUMMY!”

Just 24 hours earlier, Tekashi was released from house arrest after spending four months in home confinement. He has reportedly hired 22 former law enforcement officers for security and will be transported around town in five bulletproof SUV-like vehicles.

“PUNANI” follows a series of singles from Tekashi including “GOOBA,” “YAYA,” and the chart-topping “TROLLZ” with Nicki Minaj.

He recently signed a $5 million deal to livestream his concert. He is slated to perform music off his upcoming album during the virtual performance on Sept. 5.