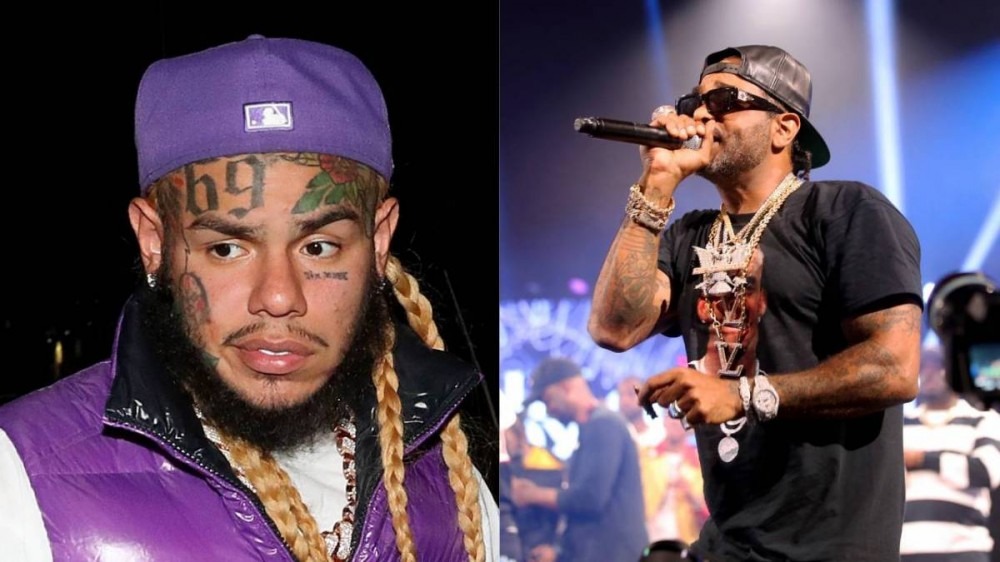 6ix9ine still has a grudge with Dipset’s Jim Jones.

While the Harlem rapper is celebrating the immense success of Dipset’s Verzuz event with The LOX, 6ix9ine has become a new fixture on Clubhouse and earlier this week during a chat with Wack 100, the rainbow-haired rapper decided to bring his feud with Jones over Jones’ alleged involvement with the Nine Trey Bloods back into focus.

He added, “On top of that, Jim Jones was caught on wiretap on my case telling the big homie Mel Matrix to go and get rid of my security. How you do it, how you shoot at ’em, they don’t got no license to carry weapons… How is that nigga free right now? Pull up the wiretap of conspiracy to attempt to commit murder! Why is that nigga not in jail?”

As he became state’s witness in 2019 for the government’s racketeering case against the Anthony “Harv” Ellison and Aljermiah “Nuke” Mack, 6ix9ine implicated Jones as a member of the Nine Trey Bloods and referred to him as a “retired rapper” on the witness stand.

In June 2019, Jones fully dismissed 6ix9ine during an interview with Real 92.3 in Los Angeles.

“Screw him,” Jones told The Cruz Show. “He did some actions that he can’t come back from, so his name non-mentionable. If you a rat, then you’re a rat forever. That’s a subject we don’t even have to touch on.”

Although Jones, along with Styles P, mentioned Shotty and Mel Matrix during the Verzuz on August 3, Jones has continued his “no 6ix9ine” policy and has refused to acknowledge him since the initial accusations.