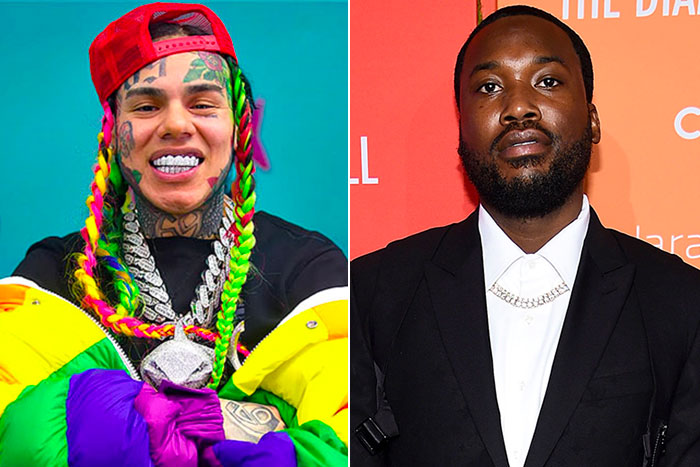 On Friday, the “GOOBA” rapper, who is on home confinement after being released from prison, called out his rival for not protesting and instead “capitalizing” by releasing new music. Without mentioning him by name, he made reference to the “wanna be Martin Luther King,” who has been nicknamed Meek Mandela on social media.

“If Kanye who is way more famous then all these rappers is outside protesting with the people why is the wanna be Martin Luther King not but has no problem dropping a song during times like this to capitalize [sic],” Tekashi wrote in his Instagram post.

6ix9ine also added more fuel to the fire in his caption: “BUT YOU THE VOICE FOR THE STREETS 🗣🗣🗣 YOU FUCKIN CLOWN.”

Earlier in the day, Meek released his song “Otherside of America” in response to the Black Lives Matter protests across the country. It’s unclear if he has joined protesters on the front lines, but he has been vocal on social media.

my whole life a protest….. literally!

The two have had issues in the past. Meek called out 6ix9ine for being a “rat” after he returned from prison. “I’m helping free people you putting family members behind bars,” said Meek. “I gotta crush you for the culture you chump! How you sleep at night lol.”

6ix9ine clapped back at Meek, who welcomed a son just days earlier. “Imagine having a new born baby come into the world & be pressed about a Mexican with rainbow hair,” he said.

Tekashi was set to release his new single on Friday, but decided to push it back for a second time “out of respect for what we are going through right now.”