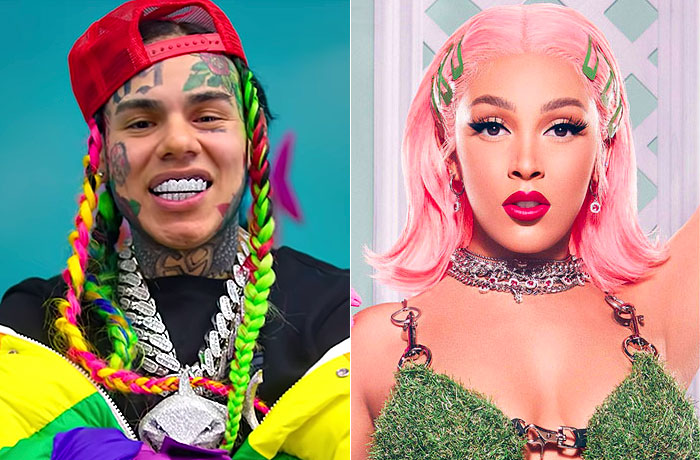 After his recent beefs with Snoop Dogg and Rich the Kid, 6ix9ine has set his sights on Doja Cat.

On Sunday, the “Say So” chart-topper went on Instagram Live to address recent allegations of racism. During the livestream, she also made reference to the competition and the charts.

“Your favorite artist–and there’s no judgment–if they care about that? Wonderful. That’s fine,” said Doja, according to XXL. “There’s nothing wrong about wanting a No. 1 and working hard to get to that No. 1. For me? I don’t give a shit.”

Although Doja didn’t mention 6ix9ine by name, he has been public with his battle for No. 1. He claimed that Billboard manipulated the charts to prevent “GOOBA” from debuting atop the Hot 100. Instead, the song entered at No. 3 following Ariana Grande and Justin Bieber’s “Stuck With U” at No. 1 and Doja’s own “Say So” with Nicki Minaj at No. 2.

After hearing her speak on Instagram Live, Tekashi decided to put Doja on blast and start his own #CancelDoja party. “She started with the wrong one…give me till tomorrow #canceldoja,” he wrote on Instagram.

In a later comment, he took another shot at her: “Someone called her Doja dog.”

Doja is under fire after being accused of making racist comments in chat rooms and recording a 2015 song called “Dindu Nuffin,” a racist slur mocking victims of police brutality. The #DojaCatIsOverParty hashtag began trending as a result of the controversy, prompting an apology from Doja.

“I’ve used public chat rooms to socialize since I was a child,” she said in a statement. “I shouldn’t have been on some of those chat room sites, but I personally have never been involved in any racist conversations. I’m sorry to everyone I offended.”

Added Doja, “I’m a black woman. Half of my family is black from South Africa and I’m very proud of where I come from.”