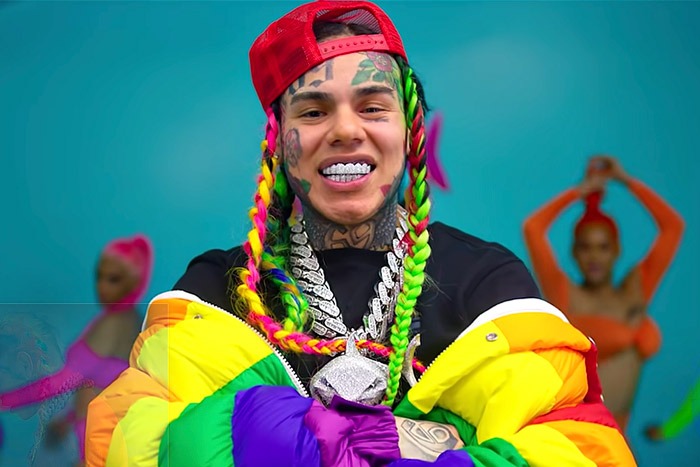 6ix9ine is putting Billboard on blast.

The rapper is coming for the No. 1 spot on the Billboard Hot 100 with his comeback single “GOOBA.” But he claims the powers that be are manipulating the charts to prevent him from getting the top spot, which he calls “completely illegal.”

While in home confinement at an undisclosed location, Tekashi posted a video explaining the situation to his 20 million Instagram followers. According to Tekashi, Billboard gets “paid for No. 1s” and “manipulates the charts.”

“I want the whole world to see this,” he said as he showed an email on his iPhone that forecasts next week’s charts, with “GOOBA” predicted to debut at No. 2 behind Doja Cat and Nicki Minaj’s “Say So.”

Ariana Grande and Justin Bieber’s charity duet “Stuck With U” was listed at No. 5. But 6ix9ine alleges that 60,000 units were added “completely out of nowhere,” boosting the song to No. 1 due to a signed CD promotion.

For a very limited time, you can get a #STUCKWITHU CD signed by @ArianaGrande and @ justinbieber. https://t.co/jrEqMbQpGO

6ix9ine is calling foul on the bundle and says Billboard is “playing favorites” in order to boost “Stuck With You” to No. 1.

He claims that “GOOBA” has over 200 million streams, more than “every artist that released a song this week.” Because of the additional units, he says that Universal and Sony have requested an audit of the numbers.

“Literally, you’re manipulating the charts now,” he said. “How can an artist that works hard get No. 1?”

“GOOBA” was released on May 8 and set a YouTube record with 43 million views in the first 24 hours, beating Eminem’s “Killshot” video. He reportedly made around $2 million off the single’s success in less than a week, including merch sales.

“DONT LET THEM CHEAT US OUT THE NUMBER 1 LOOK AT THE NUMBERS ! WE BEATING EVERYONE AND THEY MOTHER ON EVERYTHING !” said Tekashi, who shared a screenshot of his YouTube views alongside Drake’s “Toosie Slide.” “They hate to see this shoutout to drake he’s the goat but this has to be seen.”

Watch him plead his case below.

@billboard explain this to the millions of artist who never got #1 because you guys play favorites.