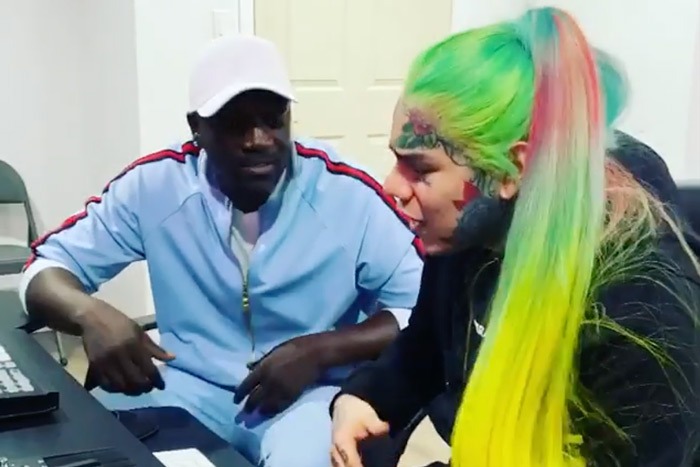 6ix9ine is calling on Akon for his next single.

On Sunday, Tekashi surprised his followers by previewing their collaboration “Locked Up Part 2,” a sequel to Akon’s 2004 hit “Locked Up.” Donning a long rainbow ponytail, 6ix9ine raps about his court case and family while seated alongside Akon at his home studio.

“Got me wishin’ that I could take it all back / Fighting with these demons / Barely even eating, barely even sleeping,” he raps. “Fighting with my lawyers for a better offer / Just wanna see my daughter.”

He then looks at Akon and smiles before reprising the familiar hook. “I’m locked up, they won’t let me out,” he sings, while Akon responds, “Never thought I’d be caught up in these streets.”

It’s unclear if this is the song 6ix9ine plans to drop on Friday. He previously announced that the follow-up to “GOOBA” would arrive last Friday, but pushed it back “out of respect for what we are going through right now.” There were also reports that the song would feature a special guest, possibly Nicki Minaj.

The collaboration shouldn’t come as a surprise. Akon previously expressed his support and desire to collaborate with Tekashi after he was released from prison. “That record probably be the hottest record that drop this year. Even if you don’t like him, you gon’ get it, download it just out of curiosity,” he told DJ Whoo Kid in April.

Akon has been receiving criticism for allowing 6ix9ine to recreate his classic song. Tory Lanez reacted to news of the collaboration, claiming that he wasn’t able to get Akon to clear the “Locked Up” sample for his own project.

Styles P, who appeared on the original track, also reacted to 6ix9ine’s controversial remake. “i will always consider Akon a brother but we have not spoke or seen each other In years I don’t know 6’9 meaning all 3 of our paths are different,” he tweeted. “I live by my code n don’t hold others 2 my code.”

My job is 2 remind you 2 boost the immune system n not get distracted by minor things i will always consider Akon a brother but we have not spoke or seen each other In years I don’t know 6’9 meaning all 3 of our paths are different.I live by my code n don’t hold others 2 my code

To make this even simpler 4 u wondering how I feel about the song.I honestly don’t give a fux the fact that this is even a topic 2 discuss with all the racial tension n plandemic/ pandemic makes me want to focus in harder on reminding y’all 2 stay golden n boost the immune!