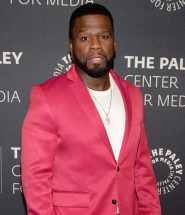 50 Cent got into a heated confrontation outside a bar and it was caught on camera.

It all went down Wednesday night on the patio at Spirit Lounge at the Edgewater Commons Mall in Edgewater, New Jersey. The rapper was enjoying drinks with a female companion when a man approached 50’s area and exchanged words before things turned violent. 50 grabbed a table and tossed it in the man’s direction, but it ended up hitting a Lexus. The shirtless man continued to taunt 50, who picked up a chair and launched it at the man.

Shortly after, cops arrived at the scene. According to TMZ, the man ultimately fled along with 50, who took off in his white Rolls-Royce.

A source close to 50 claims the incident started because the man was filming and talking smack. No arrests were made and no charges will be filed.

This is not the first time 50 has come face to face with the instigator, who is reportedly an aspiring rapper. Video footage from last summer shows a confrontation outside a movie theater where the man approaches 50 on the street while his friend films the encounter. But when he asks 50 to check out his Instagram, he doesn’t get the answer he was hoping for.

“It’s not gon’ work,” 50 tells him. “Your shit is not gonna work. ‘Cause you stupid, the way you’re approaching it is wrong.”