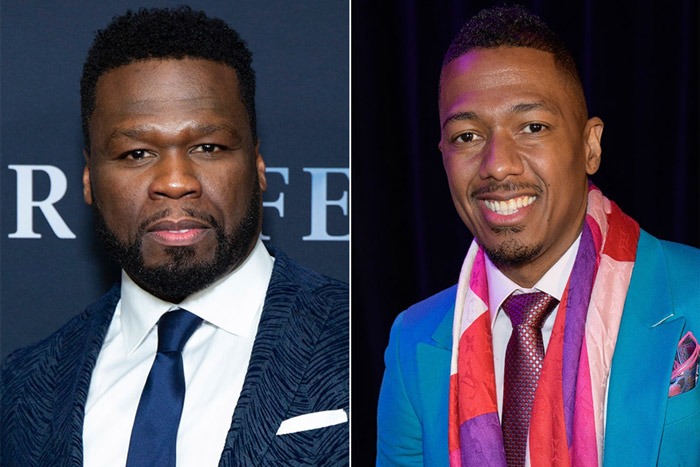 50 Cent continues to stand by Eminem in the wake of his feud with Nick Cannon.

While promoting his new ABC show “For Life” on “The Breakfast Club,” the “Power” mogul confirmed that he advised Em not to respond to Cannon. “I was like ain’t nothin’ there,” said 50. “‘Cause Em, he’ll get hype and go what? Like you challenging him in that way–’cause he comes from that format, the battle format. They actually put him in a space where he’s the most comfortable when they attack him.”

Angela Yee also brought up Cannon’s latest diss track “Used to Look Up to You” from his January mixtape The Miseducation of the Negro You Love to Hate. While many thought the song was aimed at Slim Shady, Cannon told VladTV that the track was actually about 50.

Despite the beef, Fif has no interest in issuing a response. “I would never respond to Nick Cannon,” he said. “He’s legendary corny. He’s been corny forever–from the very beginning.”

While he’s not a fan of his rapping, 50 had kinder things to say about Cannon’s acting. When asked if he would cast him in one of his “Power” spinoffs, 50 responded, “Yeah, if he did a good job. He did great in Drumline.”

50 said he’s also unsure why the multi-hyphenate continues to rap when he excels in other areas. “I don’t know why he’s so passionate about it. What the hell’s going on? You suck, bro,” he said. “I’ma just tell you the truth. Like there’s never a moment when you said something and we was like, ‘Ooh, bars.'”

But if he ever ran into him again, he would remain cordial. “I wouldn’t just punch him in the face if I saw him. ‘Cause I know what that is. I know what you’re trying to do,” he said, noting that Cannon is “trying to build energy” for his radio and TV shows.

Elsewhere in the interview, Curtis also addressed his fallout with DJ Khaled. “He’s one of the ones–I let him go,” said 50, who confronted Khaled at a recent show. “He got a good look at my shoes when I was talking to him.”

Earlier this month, they were both in attendance at a pre-Super Bowl concert organized by mutual friend Fat Joe. “Joe knows how to balance what’s going on,” said 50. “So he’ll go, ‘Yo, you good? OK, stay right here. I’m gonna send Khaled on and get him out of here and then you come on right quick.’ He knows that if they put up that energy to me, then I’m gonna respond to it. Right there, I’m gonna respond to it. I’m not gonna wait ’til tomorrow. If you’re doing it right there, then let’s address it.”

But he noted, “I don’t even have an issue with him.”

#50Cent speaks on his feud with #DJKhaled 👀…
Full interview up NOW! pic.twitter.com/6xPKa1VDSv