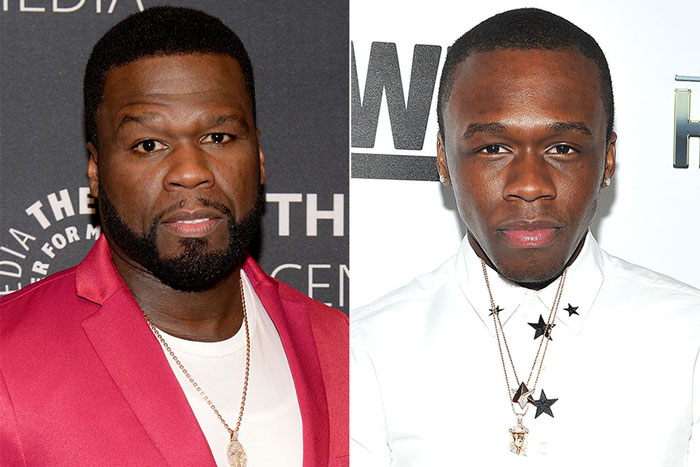 There’s more bad blood between 50 Cent and his son.

While going live on Instagram on Tuesday, the hip-hop mogul was asked if he had heard from 6ix9ine since he was released from prison to home confinement. “No, I ain’t heard from him. He’s his mother’s child now. He told on everybody,” said 50 of the rapper-turned-snitch.

He then proceeded to take a shot at his own son, Marquise Jackson, whom he shares with Shaniqua Tompkins. “He better than Marquise though. I’ll take him before I take my actual [son],” he laughed. “Fuck that ni**a.”

It wasn’t long before Marquise caught wind of his comments and clapped back on his Instagram Story. “Did he just say he would claim a rat?” the 24-year-old asked in disbelief. “Aww nah, I want no part to that cheese. I don’t know what y’all got going on over there. That’s some other shit. Stupid!”

50 and Marquise’s estranged relationship has been chronicled for years, including heated exchanges on social media. In 2017, Marquise dropped his debut single “Different” on which he opened up about his famous father. “Lost my pops, he’s still alive,” he raps.

Marquise spoke about his dad during a 2017 interview with Rap-Up. “Growing up, my dad was my superhero,” he said. “It was like having a father who was Superman, more or less. But then, as I got older, you start realizing things or you start seeing certain patterns and it takes an effect on your relationship with people. That’s what happened with me and my father.”

While he and Marquise may be on bad terms, 50 has a much healthier relationship with Sire, his younger son with Daphne Joy. For Christmas last year, he shut down a New Jersey Toys “R” Us to treat the 7-year-old to a private shopping spree.