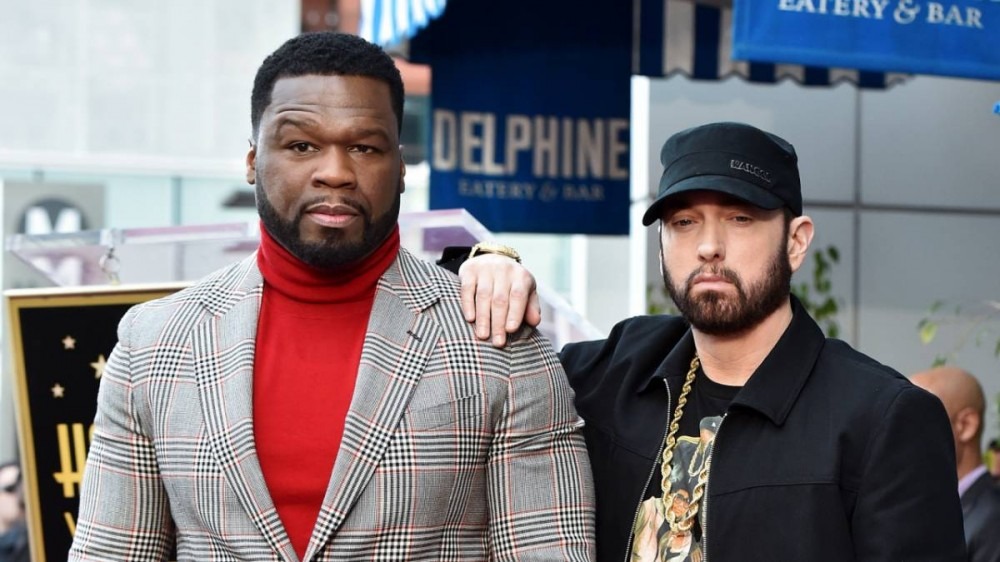 Afterwards, 50 showed love to Eminem, with whom he shared the Super Bowl stage alongside Dr. Dre, Snoop Dogg, Kendrick Lamar and Mary J. Blige during the Los Angeles Rams’ 23-20 victory over the Cincinnati Bengals at Inglewood’s SoFi Stadium in February.

“@eminem is the man,” he wrote on Instagram next to a headline of the Super Bowl’s Emmys success. “He wouldn’t do the show with out me that’s my boy ! @bransoncognac @lecheminduroi.”

In April, Drink Champs co-host N.O.R.E. revealed Eminem told JAY-Z — who helped organize the halftime show in his role as a “live music entertainment strategist” for the NFL — he refused to perform at the Super Bowl unless 50 Cent was involved.

“I said to JAY-Z, I have to ask this straight up: ‘Who is gonna perform at the NFL?’” N.O.R.E. said during Snoop Dogg’s Drink Champs episode. “And he said to me, ‘The white guy called for 50 Cent.’

Days after the interview aired, 50 Cent reacted to the news on Instagram and questioned why Eminem had to vouch for him in the first place, taking a swipe at JAY-Z in the process.

“Why would he have to say that should be the question? NORE Your big homie is running around trying to look like a gay painter,” he wrote, referencing Hov’s Jean-Michel Basquiat-esque hairstyle.

In a follow-up post, 50 wondered why Hov referred to Slim Shady as the “white” guy rather than a title that more accurately represents his status in Hip Hop.

“[eyeball emojis] why did he say the white boy, why he didn’t say the biggest rap artist in the world ?” he asked. “Happy Easter ! man enjoy the holidays.”

50 Cent was in a less gracious mood toward The Game following his Emmys wins. The Get Rich or Die Tryin’ rapper reignited their long-running feud by taunting the Compton native on Instagram after receiving the awards.

“No Caption needed [grinning face emojis],” he wrote next to a photo of The Game looking angry, before mocking the first-week sales of his Drillmatic: Heart Vs. Mind album in a follow-up post.

The Game, who admitted he was “hurt” by Dr. Dre not inviting him to perform at the Super Bowl, later called 50 a “bitch” while onstage in Houston, where the Power mogul currently calls home.

He added: “I’ma say it in Houston, I’ll say it in New York, I’ll say it anywhere n-gga, that n-gga’s a straight bitch. And I like the TV show, n-gga. Now put that on the internet.”