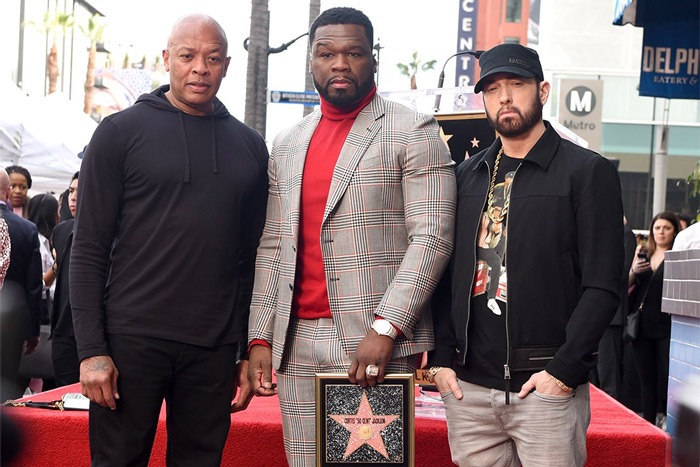 Seventeen years since the release of his debut album Get Rich or Die Tryin’, the multi-faceted rapper-actor-mogul received a star on the Hollywood Walk of Fame on Thursday (Jan. 30). Friends including Eminem and Dr. Dre were on hand for the star-studded ceremony near the intersection of Hollywood and Vine.

Following some words from former Starz CEO Chris Albrecht, Eminem took the stage to recall the first time he met a young Curtis Jackson. “It just kinda felt like he’s gonna be a star. The way he carried himself, swagger, everything. It just seemed like he was the whole package,” said the Detroit rapper, who signed 50 to Shady Records.

Em also reflected on their friendship. “I’m here today because this is not only a business partner to me, it’s one of the best friends I’ve ever known in the world and I would say it’s much more fun to be his friend than it is to be his enemy, ’cause this guy is fucking relentless. And he won’t stop.”

my ⭐️is in front of the burger joint, i wanted it to be by Trumps so i could get coverage when his get vandalized. 😆#starzgettheapp #abcforlife Feb11

Eminem listed 50’s many accomplishments including rapper, actor, director, and producer. “He can juggle, he’s great at Scrabble,” he added. “He pretty much does it all. And he’s also helped me through a lot of hard times in my own life and he’s always been there when I need him, so 50 congrats on your star, man. Hollywood is making it official what I knew from the beginning and Dre knew from the beginning.”

The man of the hour then took the podium to speak. He started off by apologizing to former Interscope CEO Jimmy Iovine and acknowledging the role he played in his career. “I’ve said things about Jimmy that I didn’t mean,” he said. “I was wrong for not inviting him and having him here today. He’s a big part of the success that I’ve had.”

The 44-year-old mogul reflected on the lack of accolades he’s received despite his commercial success. “I told Em I felt like this was a lifetime achievement award for me and it’s because I didn’t receive a lot of awards according to the success of the music,” he said before mentioning his loss for Best New Artist at the 2004 Grammys. “They gave that shit to Ervanescence [Evanescence]. Can you find fuckin’ Ervanescence?” 50 joked as the crowd laughed.

In a rare show of emotion, he fought back tears as he recalled a conversation he had with Mary J. Blige, who called to congratulate him earlier in the day. “This is a different experience. I’ve been at awards shows and when you win at the awards shows, there’s some people there that feel like they should have won,” said 50. “This one is different because everybody’s in the same space. Everybody feels the same way about it. I just want to say thank you, man, thanks for supporting me.”

The ceremony comes 10 days before the finale of 50’s hit Starz series “Power” and ahead of the Feb. 11 premiere of his new ABC drama “For Life.”