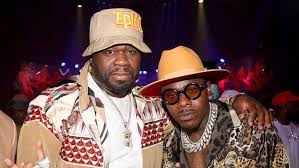 Rolling Loud New York festival goers were surprised to see someone invited to the stage after being “cancelled” earlier this year.

50 Cent served as the headliner for Day 1 of Rolling Loud New York. Among the guests he invited on stage was DaBaby. The appearance by the North Carolina rapper was approved beforehand by festival officials.

However, it is said that his performance was not shown on the event’s livestream.

Back in July, during Rolling Loud Miami, DaBaby had gone on a homophobic rant while onstage. Following the rant, DaBaby’s comments were heavily condemned by the LGBT+ community and on social media.

DaBaby doubled down on his comments causing even more backlash. Eventually, DaBaby began to be dropped off of festival lineups and lose brand partnerships, prompting him to give a formal apology.

50 Cent has defended DaBaby in the past. Following the intense media scrutiny of DaBaby earlier this year, in an interview in August, Fif stated that DaBaby is “only two years into his career. There’s no artist development. There’s no strong A&R in this. There’s definitely no media training.” He added that DaBaby would “bounce back” and said that people had tried to cancel Chris Brown “five or six times.”