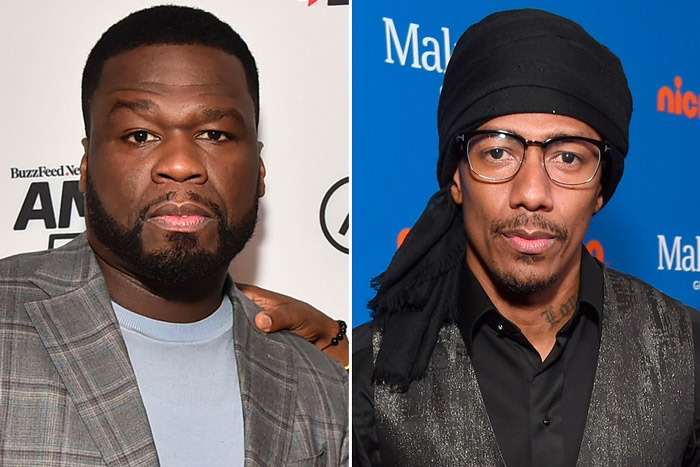 Nick Cannon has received support from Diddy and T.I. after he was fired from ViacomCBS over anti-Semitic remarks, but not everyone has his back.

50 Cent took the opportunity to take a shot at his rival, who claims ViacomCBS “swindled” his show “Wild ‘N Out” away from him. He reposted a headline about Nick’s firing and added his own commentary.

“Damn nikki what the f**k was you on that stupid ass podcast talking about? No More Wilding Out Huh! (Don’t worry Be Happy),” said Fif.

50 also posted a mock up for a fictitious Starz show called “Out Wild” starring comedian Michael Blackson. “tune into my New show Out Wild starring @michaelblackson,” he wrote before dissing Nick, “it’s kinda like a show that got cancelled. LOL.”

Nick clapped back in the comments by quoting 50’s own lyrics from “Wanksta.” “Hahaha It be your own people!! Feels like when @losangelesconfidential came in and took over G-Unit!! “Damn Homey, In Highschool you was the man Homey!!” he wrote.

Cannon was dropped by ViacomCBS for anti-Semitic comments he made on his podcast where he discussed conspiracy theories about Jewish people and praised Nation of Islam leader Louis Farrakhan for anti-Jewish comments. He later issued an apology to the Jewish community and will retain his hosting job at “The Masked Singer.”

He has also decided to “take some time away” from hosting his radio show on L.A.’s Power 106. “I will use this time to establish an action plan towards real, impactful change and advocacy aimed at bringing people together,” tweeted Cannon.

I want to assure my Jewish friends, new and old, that this is only the beginning of my education–I am committed to deeper connections, more profound learning and strengthening the bond between our two cultures today and every day going forward.

Morning radio family. I have decided to take some time away from my radio show so I can commit myself to deeper, more thorough reflection and education.

This is not the first time 50 and Nick have been at odds. Last year, 50 advised Eminem not to respond after Nick dissed his mentor on a series of tracks. “I would never respond to Nick Cannon,” 50 told “The Breakfast Club.” “He’s legendary corny. He’s been corny forever-from the very beginning.”