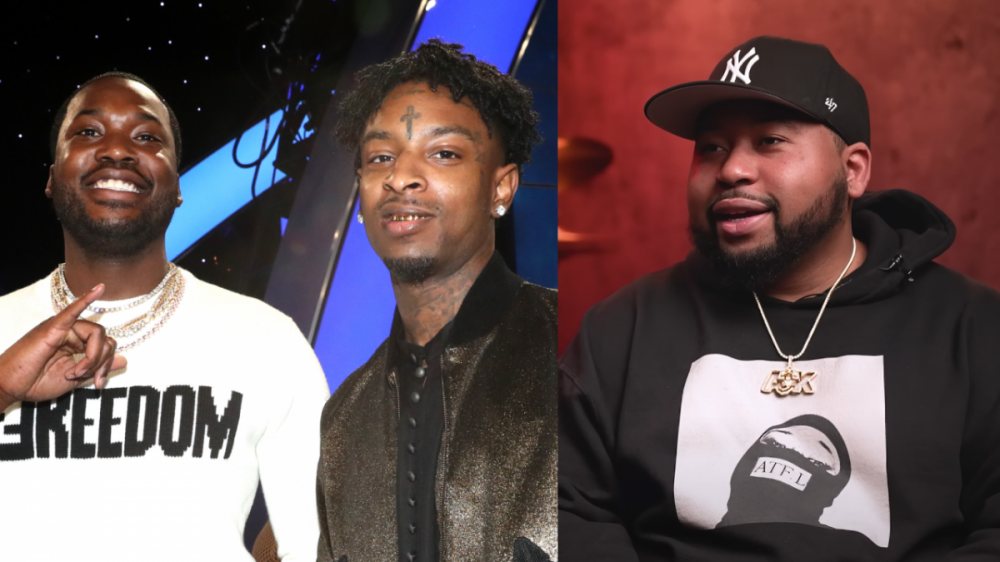 Akademiks has credited 21 Savage for playing peacemaker in his beef with Meek Mill.

The Off the Record podcast host appeared on The Breakfast Club on Monday (September 26), where he revealed the Atlanta rapper helped broker a truce between him and Meek.

“Me and Meek cool! We good now. I believe we’re good,” Ak said at the 33:30 mark when asked by DJ Envy about his relationship with the Philly native. “A wise man once told me, you don’t ever know if you’re really good with someone ’til you see them in person. But we did talk.

“21 Savage did something I thought was very dope. He gave this explanation, he said, ‘When two friends are going at it, if it goes far enough, you got to pick a side.’ And he basically said it was going to a point where he was going to be forced to be like, ‘Yo, are you really rocking with this n-gga Ak or you rocking over here?’

Akademiks explained 21 Savage got him and Meek on the phone, where they were able to have a “real conversation” and settle their differences.

“We did have a real conversation, and it was one of, ‘Let’s stop the petty bullshit to each other and if we’re not gonna be going all the way with it, let’s try to mend and build towards something that could be amicable.’ That don’t mean we’re going to be best friends in the club popping bottles, but we shouldn’t be at each other’s necks.”

He added: “I thought that was a grown man discussion and I enjoyed it and I appreciate 21 Savage for facilitating it.”

As Akademiks explained in an episode of Everyday Struggle in 2017, his and Meek Mill’s feud stemmed from his coverage of the rapper (or lack thereof) on his popular Instagram platform.

“Meek, he didn’t appreciate I didn’t post his album [Wins & Losses],” he said. “However, it was really confusing to me ’cause about six months ago, Meek had sent me a DM — him and the rest of the Chasers — they gave me a little digital jump and a light one. They said, ‘Listen, either post us this way or don’t post us at all.’

“Next thing I’m seeing, they were threatening me. ‘When I see him, I’ma gonna give him a wedgie, I’ma slap him.’ I’m like, ‘Oh shit! I think I’m posting them wrong.’ So I stopped posting them. I guess album promo time … he’s like, ‘Where’s the Chasers post?’ I didn’t know why he was surprised I didn’t post his album, but he clearly wanted me to post his album.”

Their beef erupted in 2020, with the pair exchanging words on social media and Akademiks calling the police after Meek threatened to “green light” him.

The feud culminated in a screaming match on Clubhouse that December, during which Meek called out Akademiks for fanning the flames of deadly rap beef. 21 Savage, who was also on the call, displayed his diplomatic skills by essentially mediating the call.

“We all play some part in the way shit is nowadays ’cause we all the people that profit off of that,” 21 said. “You just gotta start showing that you give a fuck and that you wanna change too, ’cause a n-gga like me, I could rap what I rap about and never do nothing and just be like, ‘Man, I don’t give a fuck, whatever, whatever’ and just live my life.

“But I have a heart, bro. And at the end of the day, I know you got a heart ’cause I know you … let’s try to do shit better. We ain’t tellin’ you to stop posting beefs … you ain’t starting beefs, you just putting a light on beefs that don’t need a light put on ’em.”

After the Clubhouse call, Meek commended 21 on Twitter, writing: “If you was there you know it was a great start for communication in hip hop! The way 21 handled it inspired me and was a good highlight!”

Akademiks added: “21 savage one of the realest n-ggas in hip hop. he can call a n-gga on their bullshit but still fw then & accept them 4 what they r.. if anybody ever seen the convo we had .. we talked privately the same exact way. I appreciate a n-gga being himself no matter who in the room.”