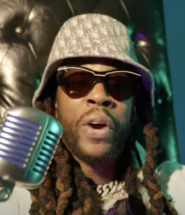 ATLANTA, GA – 2 Chainz made his debut on NPR‘s Tiny Desk concert series on Wednesday (February 17). Instead of the traditional trip to the NPR Washington D.C. office, the Atlanta-based rapper improvised with a “home” edition, which he kicked off at the ATL’s Pamper nail salon he owns.

In the clip, Chainz gets pampered with a Belaire champagne-drenched pedicure while he performs a couple of cuts from his 2020 So Help Me God! album, including the JAY-Z-sampling “Southside HOV,” which he’s still waiting for Jay to hop on. The Drench God then takes things back to some classics in his discography such as 2017’s “Good Drank” featuring Quavo and Gucci Mane.

Chainz then hops back in the studio with a band at his back for his “I’m Different” anthem. Following the five-track set, Chainz gets introspective for a moment and reflects on Black History Month and some of the role models in the community. He mentions the likes of Diddy and film mogul Tyler Perry.

“There are a lot of people who have been moving the needle forward for Black people,” he said. “And they have been for some time.”