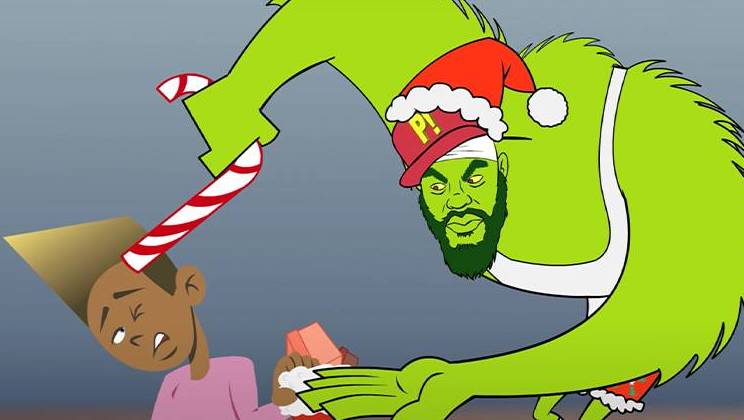 Editorial – Classic Christmas songs all have a common thread in that they manage to capture the season’s magic and wonder. However, there is no right way to celebrate the holidays; some music isn’t celebrated to the same degree because it fails to adhere to the innocence associated with Santa Claus and the spirit he embodies.

We don’t just mean swears here or there, either. We’re talking adult themes that are 180° from the term “holly jolly.”

Here at HipHopDX, we’ve rounded up a list of 12 Christmas rap songs that you absolutely shouldn’t play when the kiddies are in the room.

Few rappers have as many holiday songs as Snoop Dogg but this one featuring The Archbishop himself, Don “Magic” Juan, and Michigan spitter Jake The Flake is special. If you thought you had little something in common with pimps, it turns out you both love the holidays!

Most Festive Bars: “Fuck Christmas, fuck this shit/Stick my dick in a box, fuck this gift”

In some ways, this song is peak Sean Price — dripping aggressive IDGAF Energy on full tilt. Sampling Thurl Ravenscroft’s “You’re A Mean One Mr. Grinch,” Sean fully embodies his emerald-colored muse, The Grinch, as he holds no punches on his disdain for the holiday frills.

Most Festive Bars: “We are not giving out any Christmas joy this season/Just Christmas dick.”

The only thing harder than getting your hands on a physical copy of Christmas at Luke’s Sex Shop is choosing just one song on the compilation for this list. “Ho Hoe Hoes” narrowly leads the pack, with bars that highlight their reluctance to give anything but “D” to “hoes” expecting extravagance for the holidays.

Most Festive Bars: “On the ninth day of Bhristmas, my bitch got me a Glock/She said, “This present ain’t for you, I got this just for your opps.”

Interscope signee OMB Bloodbath and Shady Records’ Compton MC Westside Boogie connect for this twist on Frederic Austin’s 1909 iteration of “12 Days Of Christmas.” However, pleasantries like mocking birds and golden rings are replaced by new guns and 12 days of non-linear street-isms.

Most Festive Bars: “Christmas in the ghetto just ain’t worth shit/Tell Santa Claus he can suck my dick.”

This song paints an illustration of Christmas from the bottom, from sitting in a cell for selling work on Christmas Eve to just straight up navigating the realities of life in the early 90s running through the Calliope Projects of New Orleans.

Most Festive Bars: “Bitch I’m with the shit, we ain’t got St. Nick, hit a lick/Creepin’ through your house with the tool, bitch I’m Cindy Lou.”

Raz Simone portrays Santa Claus as a less than jolly figure who pulls licks, creeps through your home like Cindy Lou (from The Grinch Who Stole Christmas), and has sex with prostitutes rather than deliver gifts. Merry Christmas to all, indeed. (It’s a bop, though.)

Most Festive Bars: “Santa Claus of the hood, I pull up with the work/They call me East Atlanta Santa, run up on me get murked.”

The East Atlanta Santa traps through the snow, spreading Wop-mas spirit through the neighborhood, over possibly one of the best Jingle Bell flips of all time (courtesy of Zaytoven).

Most Festive Bars: “I visit Miss Claus, got her clothes ripped off/But that old bitch got my dick soft, now the elves are pissed off.”

From comparing Santa to a white Rick Ross to graphic — and awkward — sexual exploits and smacking Grandmas around, R.A. and Mac Lethal take the Bad Santa concept to new heights.

This stands as one of the more recognizable anti-holiday spirit records out there. Still, possibly the most forgotten trivia piece about this song is that Black Eyed Peas members will.i.am and apl.de.ap (then known as A.T.B.A.N Klann) make a rowdy guest appearance.

Most Festive Bars: “Wrap your lips and tongue around me/I’ll slide my gift under your Christmas Tree.”

This single appears on the 2008 holiday LP by Jim Jones and Skull Gang, A Tribute to Bad Santa Starring Mike Epps. If upper echelon holiday sex puns are your thing, Juelz Santana’s verse is top-tier.

Most Festive Bars: “Nick made me wait all year for the dick/12 months of Christmas screamin’ ho, ho, ho.”

It’s almost laughable now that when Eartha Kitt first dropped “Santa Baby” in 1953, it was panned by many as too suggestive — even temporarily banned in the south. It’s fun to imagine that same audience hearing Khia’s 2016 take on the classic song.

Afroman goes full a capella for this thoughtful take on the iconic classic “Deck the Halls.” Fun fact, once you hear this song, you’ll likely be incapable of hearing the original without hearing this version in your head.

Got an XXX-rated Christmas rap song that’s more suited for spiked eggnog than roasted chestnuts? Drop it in the comments and we just may make a playlist! Happy Holidays!